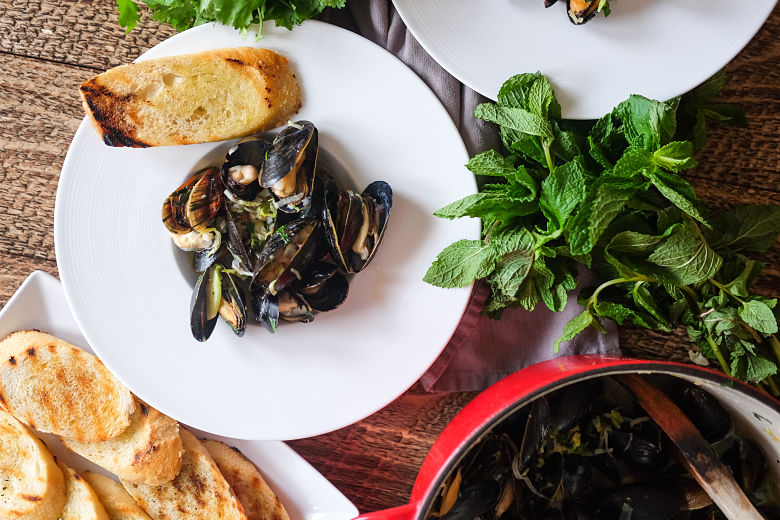 You guys! It’s May already! I can’t believe how fast this year is going by.

My favorite part about May is the amp up for summer. It feels like it is just around the corner!

There are tons of beach shacks selling the best fried clam strips, lobster, oysters, and of course STEAMERS!

Nothing is worse than a rubbery mussel or clam, so the trick is to not over cook them while injecting the most amount of flavor.

Although I am a huge fan of simple steamed mussels and drawn butter, my favorite is mixing it with Asian flavors.

Specifically, I like to use coconut milk which is such a versatile ingredient and compliments so many dishes. It gives the mussels a creamy broth but holds so many other flavors like the ginger and lime.

Serve these steamed mussels with some bread to soak it all in and you have yourself an easy dinner in less than 20 minutes!

I hope this recipe give you all the summer vibes.

Wish I ate more seafood. I always have to visit seafood restaurants to enjoy them. Anyway, I can imagine how sweet the taste of coconut milk must be. So delish!

I have never tried mussels but my husband loves them. I will have to try them next time he has them!! This looks amazing.

Yes! Love this recipe!!! And I am cooking it. Love the Asia twist, a change to the tomato basil and garlic it is usually cooked with. I have made a variation using a teaspoon of chipotle adobo in a can. It gives a smoky and spicy taste!!!

Ooooo! The adobo sounds amazing! A little smoke too!

while we don’t eat seafood, i can imagine what the combination of coconut milk, mint and leeks will do to food ! delish..

I love everything about this recipe. That will be on my menu this Friday, thanks for sharing.

Yes! it is May already and it does seems year passed in a jiffy. Love the recipe. Have never really tried mussels but would love to try. I love mint, it can do wonders to any dish..

I really like the sound of this recipe. It sounds very tasty. Love it so much.

Oh my goodness! This recipe looks and sounds absolutely delicious. I love steamed mussels, so yummy!!

The recipe looks amazing. Loved the dish would love to try this sometime soon.

Looks good but I’m vegan so I don’t eat mussels.

I have vegan recipes also!