As you guys know, I did Whole 30 during the month of April.

Overall there were some slips, however I really took a lot away from restricting myself with their rules.

I learned that even though I don’t have a gluten or dairy allergy, my body does better without them and of course without added or refined sugar.

The “diet” wasn’t as bad as I thought it was going to be and I was able to eat a lot more things than I thought.

The one thing that I didn’t like about the Whole 30 was that things like legumes and soy weren’t allowed and they didn’t give a justification as to why.

The other thing that annoyed me A LOT was that you weren’t allowed to make “treats” with Whole 30 approved ingredients – like making pancakes with almond flour, or cookies with coconut sugar.

I understand that they wanted to get that “treat” mentality out of people heads – but if the ingredients are compliant, then why the hell not?

Now that my 30 days are over I have basically said fuck that rule. No more refined or added sugar for me (I mean, unless I really want it. I’m not going to deprive myself). Instead I am going to reward myself with yummy food that is made from compliant ingredients, like these Coconuty and Spicy Lemon Bars.

I love me a good lemon bar. Lemon curd is my fave! It is so tangy and tastes great with a crust.

The crust is my favorite part of any dessert containing it.

I have seen so many versions of this easy to make dessert, but I thought it would be fun to spice it up with some cayenne and add a little anti-inflammatory turmeric for color.

The best part about this recipe is that you can really customize it by playing around with different kinds of gluten free flour and natural sugars + vegan whipped cream, made from coconut, gives you all the feels of regular whipped cream (well, more like British cream), without any of that guilt. 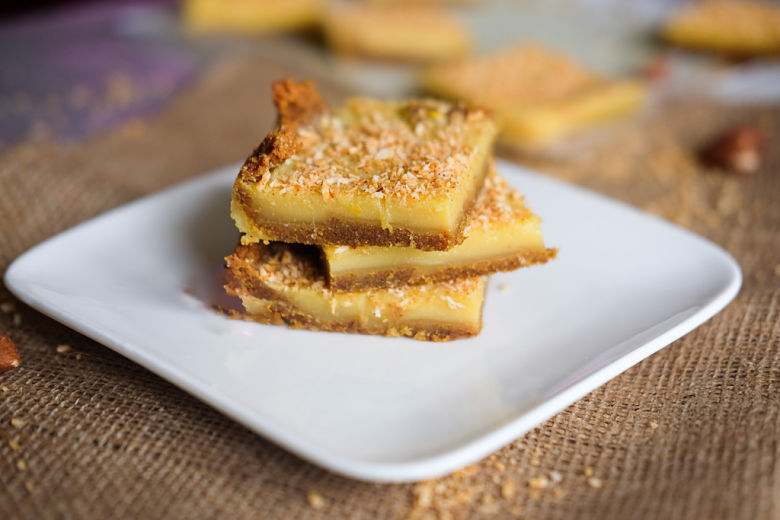 I had to refrigerate the dough because it was too sticky to work with. I added quite a bit of cayenne into the dust because I LOVE spicy, and I think the contrast with the lemon is so much fun but adjust if you don’t like heat. You could make the crust with all coconut flour also.

I haven’t tried whole 30 diet. However we don’t eat sugar (ok I try not to anyway) and this looks amazing! I am bookmarking it to try it this week. Wish me luck!

This looks lovely! I like how you included the vegan whipped cream! Do you know any alternatives to eggs that would give the whole thing a vegan option?

Follow your heart makes a vegan egg alternative and so does bobs red milk!

Wow you are brave for trying the ’30 diet’ but well done for getting through it and realizing that sometimes we just got to make our own rules. Now this is a sweet treat that I can definitely get on board with, especially since it has vegan whipped cream. Ooh and the addition of coconut with lemon sounds tasty!

Congratulations for finishing the whole 30 diet! I think it’s awesome that you’re sharing this recipe. I love a good dessert that doesn’t contain a lot of sugar or anything like that. Thanks for the recipe for these yummy looking lemon bars!

This is a great dessert! By the way, I wonder if I can do the 30 diet. I could really use something that will make me lose some weight. Would like to lose another 10 lbs.

You should try! I lost 7 pounds

I could no achieve that diet on my life, to week! Also love cakes too much! the lemon bars look like heaven to me, will have a try in doing it myself!

I’ve always wanted to try out Whole30, but I find it to be too restricting. I think legumes and stuff like quinoa, oatmeal, etc. are fine. I’ll probably end up doing some iteration of it though. I too, feel better without dairy in my body. I’ve never gone completely gluten free, so I don’t know how that would affect me. As for completely giving up sugar?! NOPE. I live once 🙂 PS-Your bars look delicious!

I love everything you said!!!

OMG, you have no idea how much I love lemon bars.. and you gave it a vegan twist too! I love it! I will definitely be making these soon!

This sounds amazing but then I am a big coconut fan. I didn’t realise you could make a vegan cream with coconut cream but that sounds divine!!!! I bet that lemon zest gives an extra tasty kick.

You definitely gave yourself a nice lemon bar treat after your 30 days of being on diet! That is just well-deserved since many like me wouldn’t even be through with the first week!Ha-ha! They look so scrumptious!

I love this coconut and spicy lemon bars recipe. It sounds very delicious. Would definitely try making mine one of these weekends. Hope I get it right.

Oh wow this looks great!! I love lemon and coconut but have never had them together! I bet they are utterly delicious!

I like the option of this being vegan. I’m a HUGE sucker for lemon bars. I just think they’re so pretty and it always calls out to me at the stores for some reason. I’d love to try this! Seems a lot healthier than mos.

Honestly I am a lover of all things lemon. So I am really sure I would love this as well. And knowing that it’s vegan makes it all the better. I have a friend who is going vegan who I will have to show this to. She will love it.

Oh this is a good dessert after lunch, or during afternoon tea! Looks delicious and tasty!

Never tried to eat this before but this recipe looks like a delicious one. I will definitely try to make this to see the taste.

I saw this post few days back, and i wondered, how it is going to taste,and i saved it as i wanted to try and today I Just tried it!
It was amazing! It’s one of the best desert I’ve cooked , this is now my go to recipe for dessert.
Thanks for the recipe for these yummy looking lemon bars!
Keep sharing 🙂

YAY! I am so happy you liked it! i would love to see your versioN!