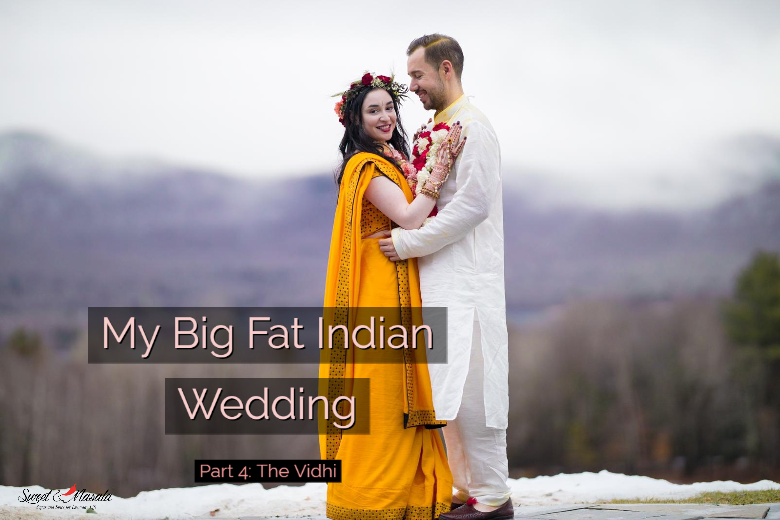 Wow! Can’t believe we are already to PART 4 of this 7-part WEDDING SERIES!!

Day 2 (technically day 3….) of our wedding festivities kicked off on a Saturday morning bright and early with the Vidhi.

The Vidhi is comprised of a series of pooja’s (prayers) inviting Ganesh to the PARTY and a haldi (turmeric) ceremony which preps your skin to be dewy and glowy ahead of the of the wedding ceremony.

To think, we even included facials for the bride and groom as part of the wedding festivities! What other cultures do you know that does this?!

Check out THIS post for more detail on what the Vidhi signifies.

We woke up hella early to get ready for the Vidhi. 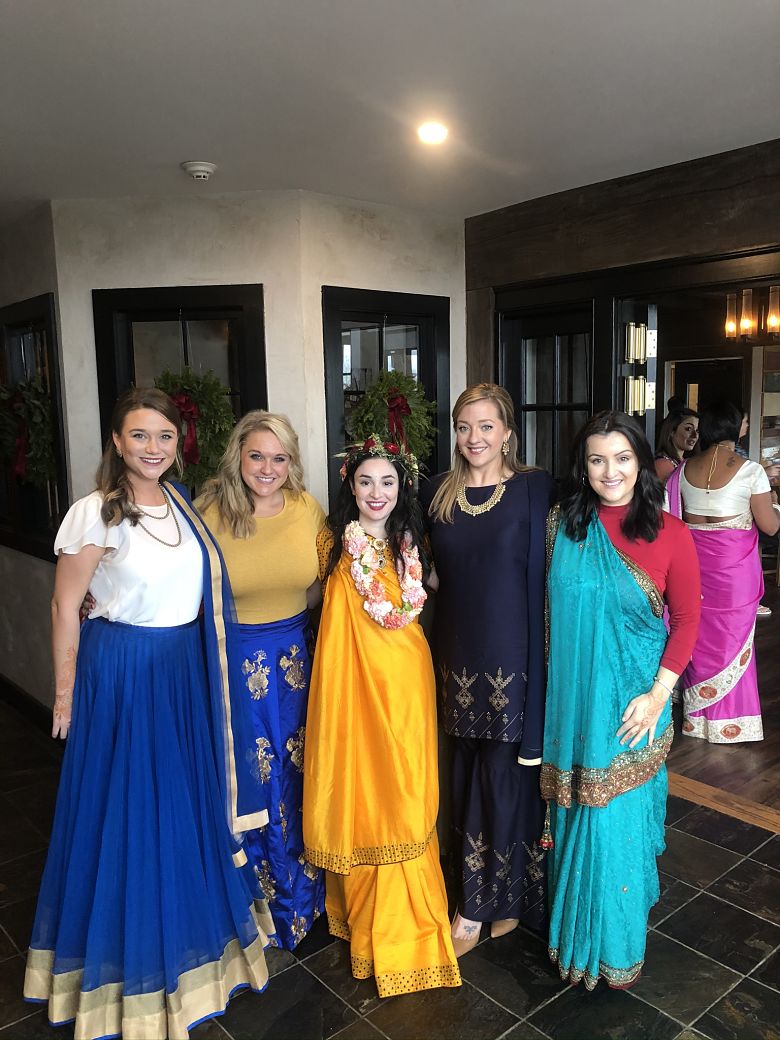 The night before was my mendhi party and Justin’s men’s night (read about them HERE). I pretty much fake drank all night so I was feeling great this next morning. I can’t say the same for Justin though.

(but like, what’s fake drinking? fake drinking is when you always have a glass in your hand. Its best to have it always half way full so people aren’t offering you a new drink and aren’t giving you shit because you haven’t drunk any of your drink)

When I got home from the mendhi Justin was already in rare form. I’m not sure what it is with Indians and whiskey, but I feel like it’s the same thing for men as a whole and whiskey (& bourbon and scotch….).

My family members along with our friends had managed to get him toasted AF. Someone had bought him a cigar to puff on, and even though he isn’t in to cigars he thought “what the hell” and smoked that shit.

Our amazing photographer saw and thought it would be cool to do a few shots of him puffing out the smoke.

*a word to the wise* – if you’re not a smoker (ciggs, cigars, weed….whatever), DO NOT SMOKE AND DRINK at the same time. That shit will straight fuck you up and leave you with the spins and an upset tummy.

& sorry to call you out babe, but you were DONE.

As I was clearing up empty beer bottles Justin was passed out in one of the bridesmaid’s rooms. It was that kind of night.

I ended up waking him up and dragging him into our bed, feeding him Advil and water. 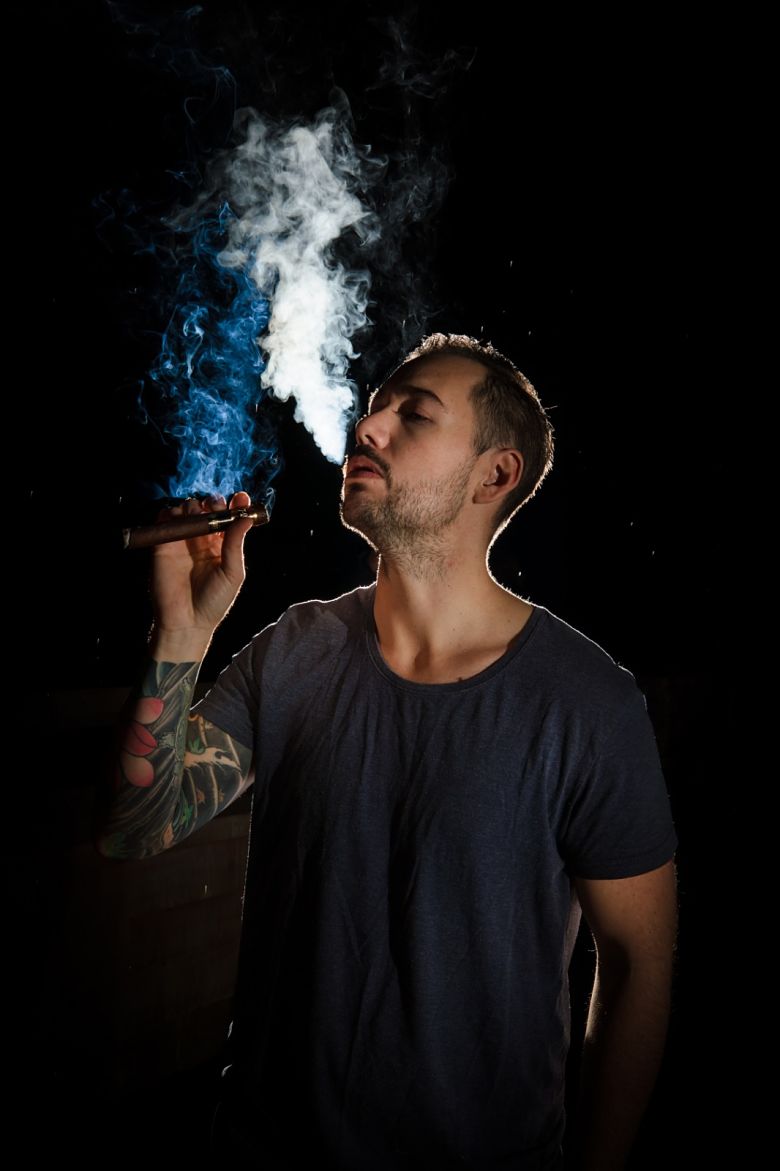 ask him if he remembers.

I AM SUCH A GOOD WIFE.

Anywho, morning time was a cluster fuck. The Vidhi started at 10 am with a breakfast before that.

My bridesmaid Julia did my hair and makeup and we rushed to my mom house to have my aunts dress us.

It’s crazy how a lot of the women in my family don’t know how to wear sari’s. I wish I had learned that skill. Sari’s are a typical outfit wore by Indian women and there are so many ways to modernize the fabric into every day wear. (Check out Komal and ammachic for ways to style your sari).

Once we were dressed and ready to go it was breakfast time.

Like I mentioned in the other wedding posts, Indian food and vendors are virtually non-existent in Vermont.

When we decided to get married at the Mountain Top Inn they agreed to do a custom Indian menu for us during the Vidhi (breakfast and lunch) and the wedding (lunch, cocktail hour and the reception). 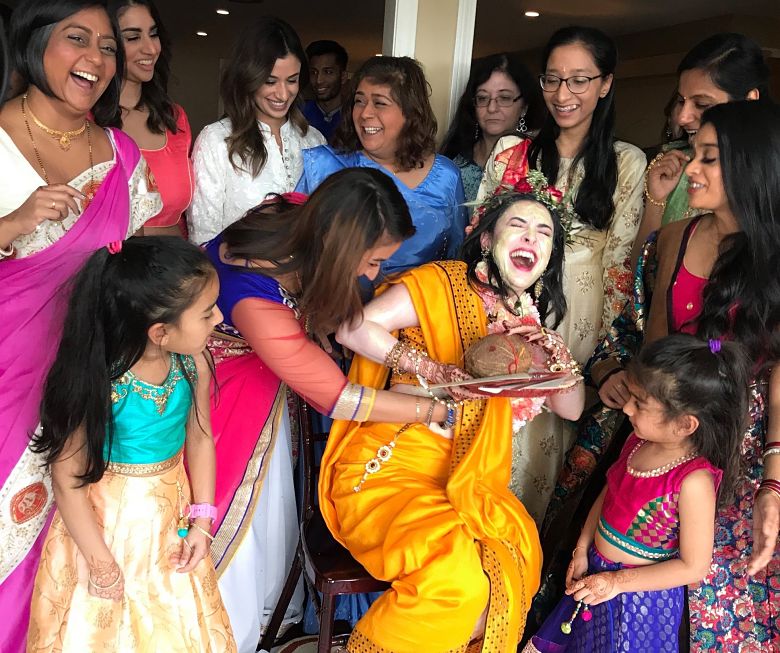 I’m not going to lie. The menu was a total struggle and stress point for our wedding.

MTI is known for more farm to table food, and, of course, AMERICAN.

Chef Tony had never prepared Indian food before so there was a learning curve. After 3 tastings and a 30-page booklet of the Indian recipes, we thought we had the food DOWN.

For breakfast we decided on aloo paratha (bread stuffed with potato) with Indian pickles, yogurt and masala chai.

Right off the bat I received complaints from guests regarding the paratha. They mentioned it was hard, slightly sweet and had no potato in it.

I was instantly disappointed and stressed. We had spent about 6 months trying to get this right and it seemed all wrong.

I tried one of the parathas and it was how people described it. Slightly stale and a minimal amount of potato. I was upset, but pushed through hoping the lunch would be much better.

NOTE: That being said, MTI did the best they could with the resources they had. Making an authentic Indian meal is no easy task. I think, for me, the major disappointment came from seeing some guests not happy. A 3-day wedding is A LOT and if people aren’t fed correctly it doesn’t reflect well on the parties hosting.

I’ll get back to the food in just a second. 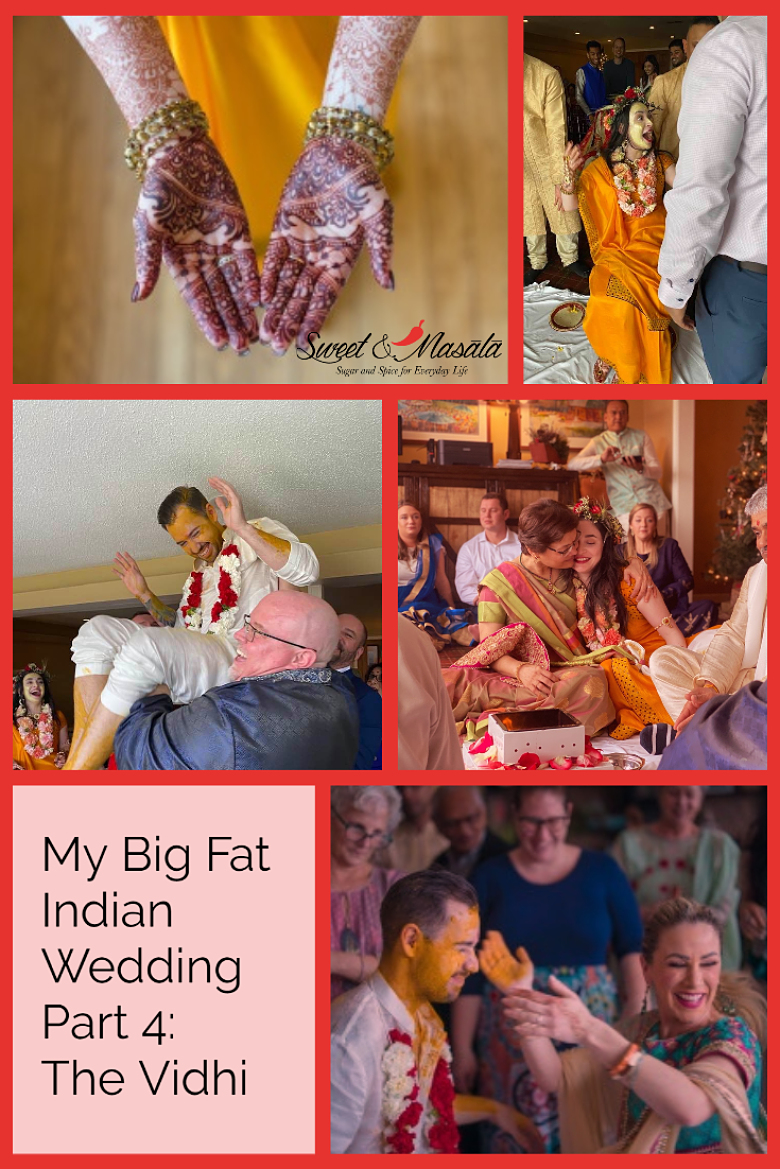 The Vidhi ceremony itself was amazing.

It was held in the lobby living room of MTI which has floor to ceiling windows with a view of the lake and mountain.

Poojas were performed on both sides of the family and Justin and I both got to partake in a little haldi action.

Justin got it WAY worse than me (because I’m a princess with sensitive skin, DUH).

One of my favorite parts of the Vidhi was getting raised in the air by my uncles. My head hit the ceiling! I am not sure the significance of raising us in a chair, but I remember my mom yelling at me to “RESIST” my uncles from raising my chair…..that didn’t happen at all. I did my best to resist but I was up in the air 2 seconds later. LOL.

After the Vidhi, which was about 3 hours long, we headed back down to the dining hall for lunch.

I was a little scared to see how the food was going to turn out, but luckily, unlike breakfast, lunch was a full 180!

We served a potato and pea shaak, rice, daal, papdi and gulab jamun to name a few things.

Chef Tony executed this meal really well and I was very happy with how the lunch turned out. The best part was hearing people enjoying the food!

Side story – my Ba (grandma) made carrot and chili pickle for the lunch and people confused the THAI GREEN CHILIES with GREEN BEANS.

I’m sorry but that’s fucking funny. Needless to say there were a lot of red faces because they are so damn spicy! I’m not sure how chilis were mistaken for green beans, but I got a good laugh out of it.

That evening we hosted pre-wedding parties where our guests were able to get to know each other better, have some food and drinks and prep for the next day. THE WEDDING.

I’ll end this day right here and get into the wedding next week.

~ Special Thanks to my Vendors ~

~ All photos by P Taufiq Photography

What to Cook Your S/O on Valentine’s Day

Your wedding traditions are really fun and exciting.

So sorry to hear that they had complaints about the food. I totally agree that making an authentic Indian meal is not easy.

It’s not! They did their best though!

This looks amazing, my wedding is in October I’m of Nigerian heritage and he is of English/Hong Kontio heritage. We have a nice mix of traditions so it will be fun. Your pics look amazing and looks like an awesome time.

I’ve heard so many cool things about Nigerian weddings. Congrats to you and your fiance!

It is nice to read about different wedding traditions in other cultures. Indian weddings look so lavish but fun at the same time. In my country, it is just the wedding ceremony, then a reception follows and that’s it. Some couples would do a Bachelorette party (for the bride to be) and a Stag night (for the groom to be). Depends on the budget they have though.

What a captivating post, Since i started following this your wedding series, it has always felt as though i witnessed the whole event because of your beautiful narrative.. Cant wait to read how it all went down. And your pictures are breathtaking as usual, the smiles and laughter are so charming.

Awww this is so nice of you! And thank you for following along too!

How lovely! I can picture it in my head lol. FYI, guests always complain about food but they still eat it and return for the 3-day event lol. I can imagine how hard it was to recreate authentic Indian cuisine.

Oh wow this looks amazing. What a fab and exciting display and so much to enjoy with family and friends x

All the clicks are amazing girl. You guys look good with each other. Have a happy married life.

I love Indian weddings because they are huge events filled with traditions and colors. Congratulations on your wedding journey!