Welcome to part 3 of my wedding series! If you’re just tuning in you can catch up HERE AND HERE, as I break down my BIG FAT INDIAN WEDDING.

Our mendhi night kicked off on a Friday.

But first, let me rewind a little.

Although J and I live in Boston we decided to get married in Vermont. Since we were having a winter wedding we really wanted snow on the ground and thought the best place to do that was Vermont.

Historically the location we got married in has a few feet of snow during that time.

I was SUPER excited to have a snowy backdrop for the wedding. Unfortunately, mother nature had her own plans and there was NO SNOW.

more on that later. 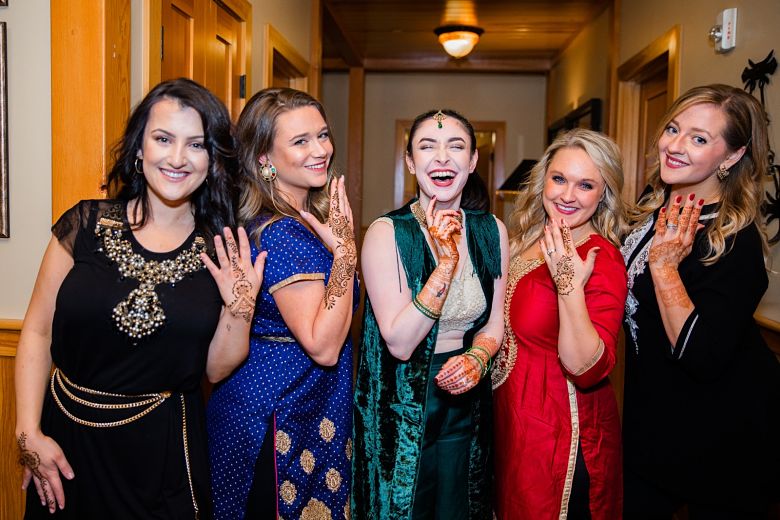 Back to the mendhi.

J and I woke up at that crack ass of dawn and drove our asses up to Vermont so that we could get settled in and meet with our coordinator before family, friends and festivities kicked off.

Wow – I haven’t even mentioned where we got married yet!!!!

We got married at this awesome venue in Chittenden called the Mountain Top Inn. It is V romantic and nestled between a lake and gorgeous mountains.

MTI is on 700 acres of private woods and meadows and the views are to die for!

They have a main lodge and then cottages and guest homes on property that guests can book for larger parties.

J and I booked The Jewel at Meadows Edge for ourselves and our bridal party and the mendhi was being hosted at Mountain Aire.

Let me tell you something. 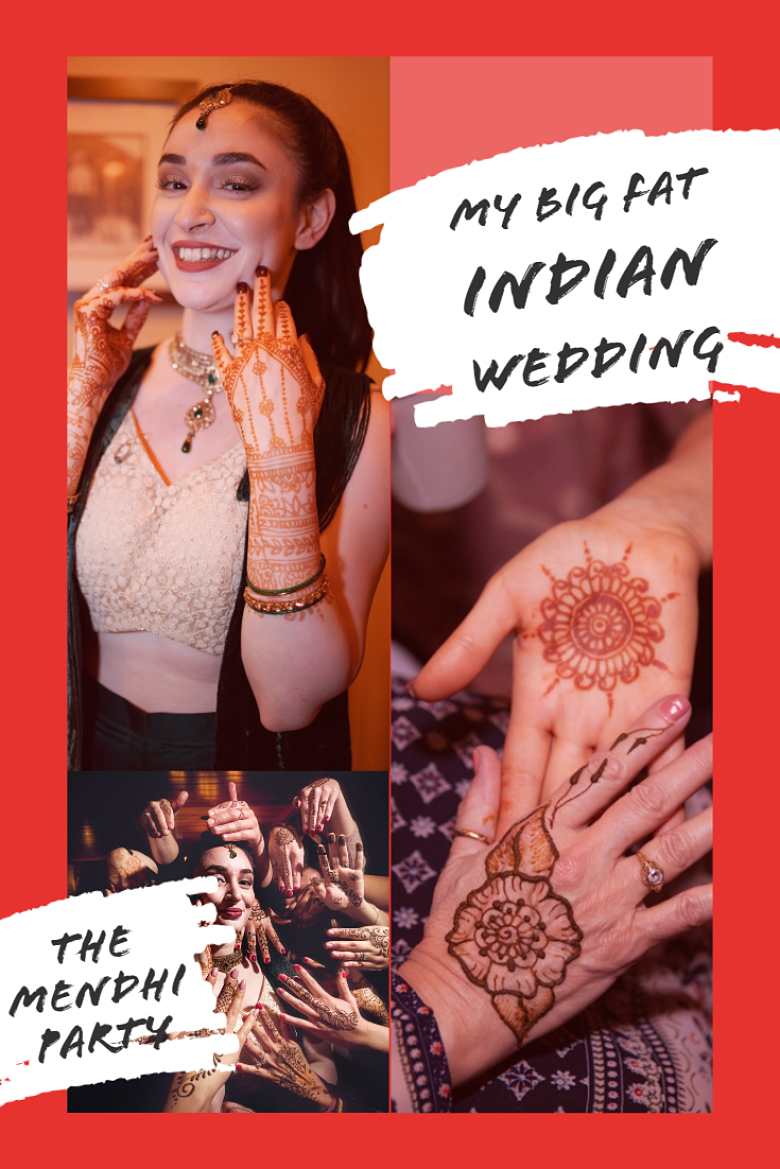 These houses (& the entire property) are fucking INSANE. I can’t even begin to describe to you how gorg and big the houses were. These pictures don’t do it justice at all.

We woke up early, got there, checked in and unloaded our cars filled with booze, foods and fun for the weekend.

The venue has a salon on property, so I got my hair done by a local stylist. I was channeling allllll the Ari vibes for this lewk.

I bought clip in extensions from Luxury For Princess, on the advice from my fab Boston stylist Raymond Anthony from the James Joseph Salon at the W.

Shout out to my girl Kruti for the great stylist rec!

I went with a super high, long ponytail look for the night.

I decided not to hire a makeup artist for the first 2 days because my bridesmaid Julia is AMAZING at makeup. 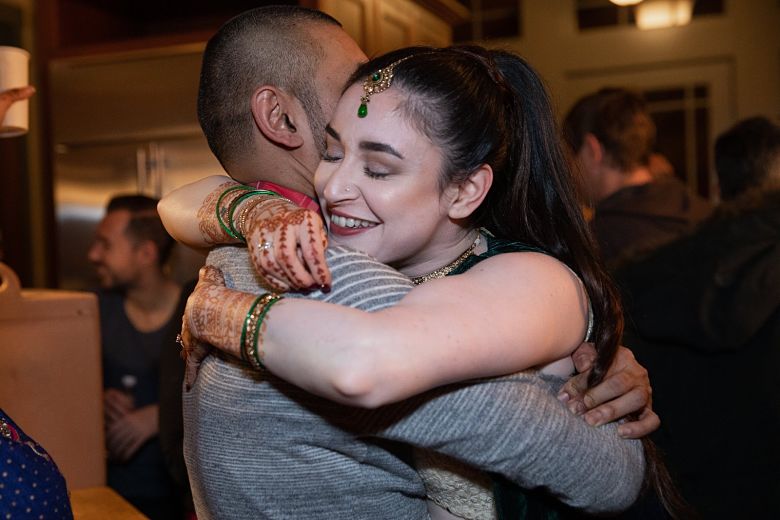 She gave me a super dramatic eye which brought my whole look together.

My outfit was a custom-made outfit by WESTxEAST, a New York based design firm with outfits made in India.

Tania and  Liya, co-founders of WESTxEAST were so great to work with. They also made all the bridesmaids dresses and Justin’s wedding outfits.

I had reached out to them at the end of 2018 to start putting together my custom looks. I had ideas of what I wanted all the outfits to look like and they really made them come to life. They made me a design book complete with digital sketches and multiple fabrics, colors and trimmings to choose from. We had a few face-time meetings to go over the book and make the final decisions on all the outfits.

As you guys know, I’m not a total fashionista, so it was nice to work with knowledgeable people who were also dead ass honest about EVERYTHING.

If something wasn’t working they told me. I also wasn’t the brightest at the different types of materials there are out there, so they took the time to explain them to me, so I could have stylish, yet comfortable clothes.

I knew I wanted to wear pants to the mendhi night, so they made me an emerald green trouser with a slight bell flare at the bottom, a shimmer fold blouse with a heart shaped neckline and a velvet green, sleeveless jacket with fringe. 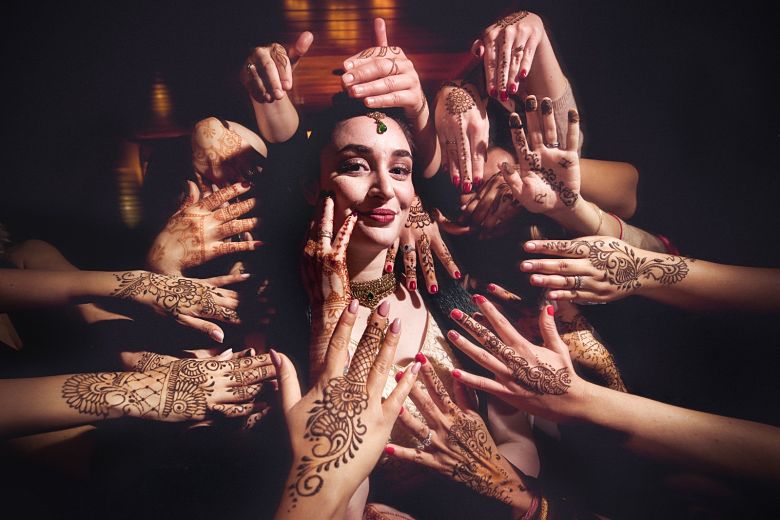 NOW – if you are planning on having an Indian wedding in Vermont, I would suggest doing it in summer because, first, there are NO INDIAN VENDORS in Vermont. All of them have to come from Boston and they charge an arm and a leg to come in winter because of the weather.

It was painful to try and find vendors, especially furniture, décor and of course mendhi.

More to come on other vendors later.

After months of googling, being pushed around and sent referrals, I finally found a woman named Jamilah, from Jamilah Henna Creations, to make the trek. She is based out of Connecticut and basically saved the party by agreeing to come up.

For the mendhi night we decided to keep it ladies only, while Justin hosted a men’s only party at our house.

What was really great about our wedding and this property was that all of our guests had the opportunity to really get to know each other over the course of the 3 days. Since the property was so big, had lots of activities, and the events were in a different location each night people kept running into each other. It was kind of like we had our own personal resort for the weekend + MTI offered free shuttle services throughout the property, so nobody had to worry about driving either.

At the mendhi party ladies from both sides of the family had a chance to put henna on too. Usually the guests mendhi is less elaborate than the brides.

All of our signage was done by Bright and Blue Designs. She really listened to us and made the beautiful signs! More on her during the wedding post in a few weeks.

We served a variety of veg and non-veg Asian finger food like lettuce wraps and dumplings at the event and my matron of honor, Rachel, whipped up a white and red sangria for us all to enjoy.

Def can’t have a party without a little boozy action. My mom micro-managed the shit out of the sangria. She HAD to have a red berry sangria. Not complaining though, it was damn good.

In true Komal fashion the mendhi night party music was stuck between 90’s and 2000 ‘s pop, with plenty of Spice Girls, Christina Aguilera and Ariana Grande.

It was a nice chance for everyone to mingle and get to know each other before the next event, the Vidhi!

I’ll pause here because this was a long one.

Have you ever attended a mendhi night party before?

~ Special Thanks to my Vendors ~

~ All photos by P Taufiq Photography

Sounds like you had a great time! I like your outfit! That would have been fun to have your wedding in Vermont, but that’s too bad there was no snow.

How nice. I have not been to that kind of party but it is nice to know about how weddings are held in the Indian culture. It sure looks so festive and everyone had a great time.

What a beautiful party, all of the intricate details are so beautiful, I don’t know anything about it but I admire the beauty.

This looks nice and a beautiful wedding. I have not been to that kind of party but You’re looking gorgeous on your outfit! Awesome photos!

Congrats! You guys are all looking great on the first group photo! Continue to share that happy vibe!

Love it! Love watching Indian weddings as it reminds me of traditional Nigerian weddings. Elaborate, luxurious and OTT lol.

This is so much fun. Thank you for keeping us updated with your wedding happenings. I really enjoy reading it. So happy you had a blast with your mendhi party.

This has become trendy with students. The girls in my son’s classes are often seen with the hennas on their hands.