I’ve been taking some time off to enjoy this time with our newborn! I’m back now, with fresh new posts and recipes starting with our birth story!

Rahi Dhiru Montgomery was born at Brigham and Women’s Hospital on October 23rd.

He was born on his due date – which is how I know he is my son. Like his mom, he was prompt and on time. I’m not the type to be late.

His arrival into this world was lonnnngg. He definitely took his sweet ass time.

On the morning of Thursday, October 22nd…3am to be exact, I kind of just woke up out of a dead sleep and felt like I had to go to the bathroom. I barely made it to the toilet before I realized my water had broken.

Ok – so the movies totally screws with our perception birth and of water breaking. It’s V dramatic, water gushing everywhere and the mom is screaming in pain. When, in reality, only 20% of women water breaks before labor.

When my water broke, it was a small gush, and I knew, it was GO time.

I went back into our room and woke Justin up and we called our doula who said to just take it easy and try and go back to sleep and get some rest.

Like. Wtf. How am I supposed to “get some rest” when a baby is about to come out of me!!!

We laid back down for a few hours and then I started to get restless again. Around 5am Justin offered to put on a movie to help get my mind off things. We put on She’s The Man – btw, if you haven’t seen it you are missing out. This is a highly underrated movie and is pre Amanda Bynes going off the deep end – classic.

Once the movie started, the early labor contractions started to kick in and I couldn’t get comfortable at all. We eventually decided to get all our hospital stuff together, take showers, take Khush on a walk, go to Starbucks (I needed a sandwich) and then finally head to the city.

I really had my heart set on an all-natural labor and birth, so we decided to labor in a hotel close to the hospital so that I could wait it out at as long as possible before we headed in.

The hotel was cool. We checked in, watched a few James Bond movies along with some episodes of the Great British Baking Show (the show is an addiction!).

In between watching tv my contractions were increasing in pain and becoming more frequent. Our families were also up our ass texting us every 30 minutes on the status of the baby.

We were also getting hungry so Justin ordered a burger from Yardhouse and I nommed on some truffle fries – leave it to Justin and I to incorporate food into our birth story.

I spent time going in and out the shower of the hotel to help ease the pain and Justin helped by giving me massages and being my personal water boy.

anyways, as the pain increased and the contractions became closer together, I had this overwhelming sensation to take a poop! I kept trying and no poop was coming out, so we thought it was TIME.

Once we got to the hospital Justin wheeled me into the check in area where they started asking me a bunch of questions and I was in a LOT of pain. Due to Covid restrictions Justin wasn’t allowed into the check in room.

The Covid stuff really messed me up. Justin wasn’t allowed in the check in room and I could barley talk. The admin was asking me question after question and as I was about to answer another contraction would happen and I would get the wind knocked out of me. Finally, the admin pretty much said fuck it and let Justin in to answer all the questions.

Once we were checked in they took me to a holding room to get checked and wait before a delivery room was available. They wouldn’t let Justin or my doula into that room either and Justin was PISSED. Rightfully so. He didn’t know where I was going and they couldn’t give him a time frame on when he could join me again.

For me, this was scary too. They took me into a room where they checked out how much I was dilated (we found out I was only 6cm dilated when we arrived at the hospital. Not as far along as we thought I was) and gave me a covid test. I was in this room – by myself- for over an hour, going through contractions by myself….it was awful. Luckily, I had my phone with me so Justin and my doula kept talking me through the contractions.

When I was finally admitted into a labor and delivery room Justin and our doula were finally able to join me and the start of a long night began.

I stayed at 6cm for about 12-13 hours which is V unusual. We also found out that my full water sac hadn’t broken earlier in the morning. I had another partial break during the 12 hours and still…nothing.

I hadn’t taken any drugs yet and I was EXHAUSTED. It had been 24 hours.

We decided to manually break the rest of my water to see if it would move the process along….it didn’t. I progressed to 7.

In between all of this Justin was right by my side. He never left; didn’t go to sleep. held my hand, gave me massages. Helped me walk to and from the shower. Rubbed my back when I was healed over in pain. He was as solid as a rock. 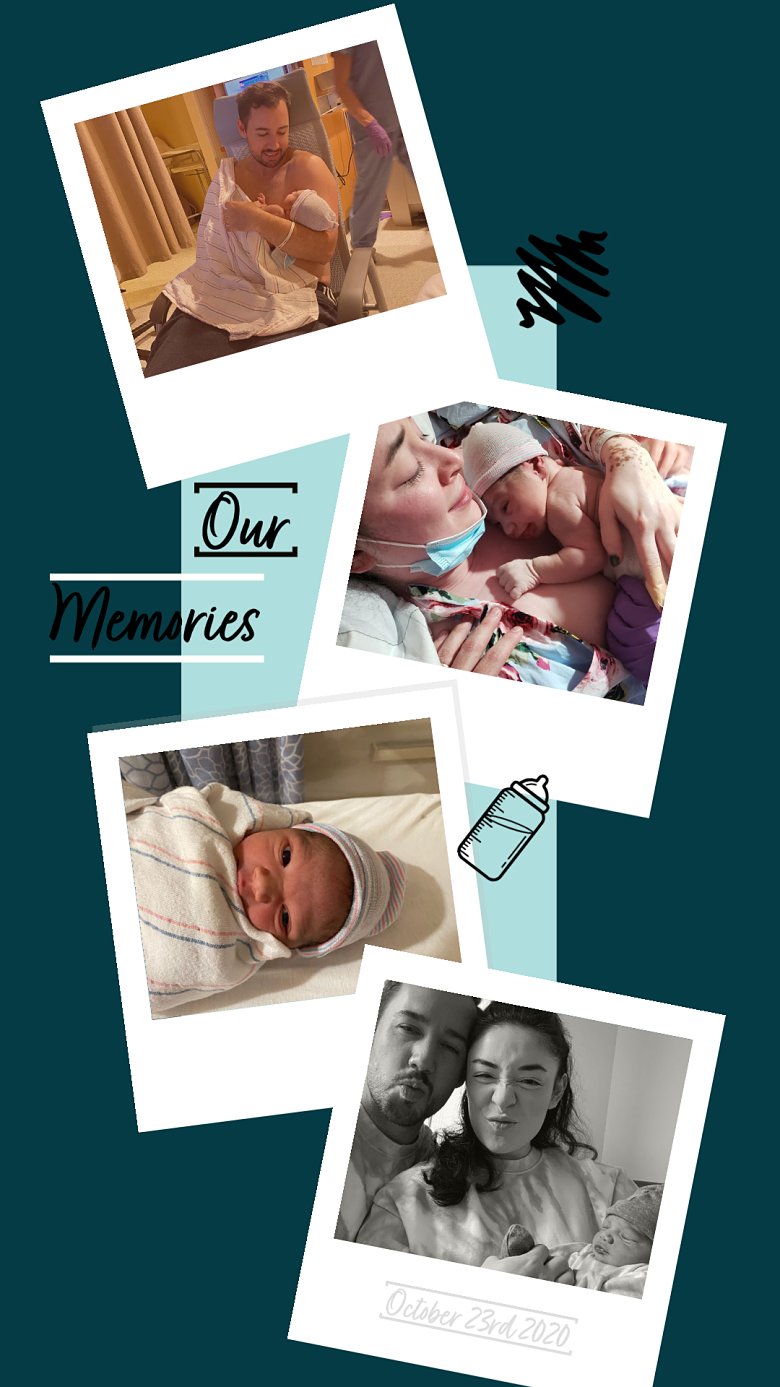 Finally, after 26 hours I couldn’t do it anymore. I needed to rest and I needed a break – so in came the epidural. I was so reluctant to take one and almost felt like a failure….

My birth plan was to do it naturally, but after all my body had gone through in the past 26 hours, I wasn’t sure I would have the strength to push out a baby. With my birth plan out the window I was so glad I took the epidural, because, well, it was fucking great! Birth on an epidural is like a relaxing day at the beach compared to what I had just gone through.

With the epidural I was able to rest for a few hours. From, there, over the next 10 hours, I very slowly progressed to 10cm.

We found out that Rahi’s head had tilted away from the cervix and that’s why I wasn’t progressing with dilation, so Justin and my doula helped me with exercises to help get him into position (thank god for my PT husband!).

We were SO close to a C-section since so much time had passed and the amniotic sac had broken. The doctors felt comfortable waiting a few more hours before that become necessary and luckily it didn’t come to that.

Our little prince finally he made his appearance at 4:05 pm.

Pushing was such a wild experience! I pushed for 1 hour, trying every position to get him out. I didn’t even know there were multiple positions to push! Again – the movies make it seem like its your back or nothing, but nope! Being on all 4’s really helped me understand how to pus him out. It felt right while I was doing it and I felt progress with every push.

When he finally came out, I was so overwhelmed with happiness and exhaustion all at the same time. They put him on my chest and in that moment my heart filled with a love I had never felt before. Since his sex was a surprise the first question I had was “is he a boy?!” – during my whole pregnancy I had felt like he would be a boy…mom’s intuition, I guess.

Being pregnant and having a baby is like this alien experience. Something growing inside of you. A bunch of cells coming together to create a human. It’s a beautiful thing. A natural thing – and a moment I’ll never forget.

Thank you for sharing!! Definitely a great read and to help understand what’s to come!

Congratulations on your newborn! He looks so adorable . Great to read about your wonderful experience and yes truly it’s a humbling and satisfying feeling . Enjoy 🙂

Rahi is super cute! Err… your doula… wtf! & with the covid restriction! Oh Mama! You’ve done so well! Hands down to you. I could never imagine going into labor during covid time. My word! You are a strong Mama. Congratulations!

Oh my goodness! Congratulations! I remember you announcing your pregnancy and now little man is here! I love his tiedye tracksuit, so sweet!

Wow what a story! Love that you had YardHouse (one of my fav places to eat!). Good for you for adapting. Plans are great, but adapting and pivoting is key! A lesson for us all this year! Congrats!!!!

Wow, I can’t believe you had to go through a pregnancy during one of the most craziest times of the world! People are going to be asking you about that for the rest of your life. Glad it’s all done now though, and you get to enjoy time with your baby.

Thank you for sharing your birth story and the reality of giving birth vs what is being portrayed in movies. There were many unexpected turns and difficulties but you’ve made it through it all. You are one strong and brave mama! Congratulations!!

Congratulations! Must have been so hard having to be alone due to covid restrictions. I’ve had 3 babies and each birth very different and you realise soon that sometimes things don’t go to plan so don’t feel bad about having an epidural.

Congratulations on the new baby! Glad you’re safe because like you said, Covid really messed up everything. I’m really being careful not to get pregnant coz of Covid 🙁

Congratulations on your adorable new arrival. I don’t think many people have stopped to consider how the current global pandemic could affect someone’s experience when it comes to giving birth. However, the restrictions aren’t making things easy! My nephew was born earlier this year and it kept us from meeting him for FAR too long. I can’t wait until this is all behind us!