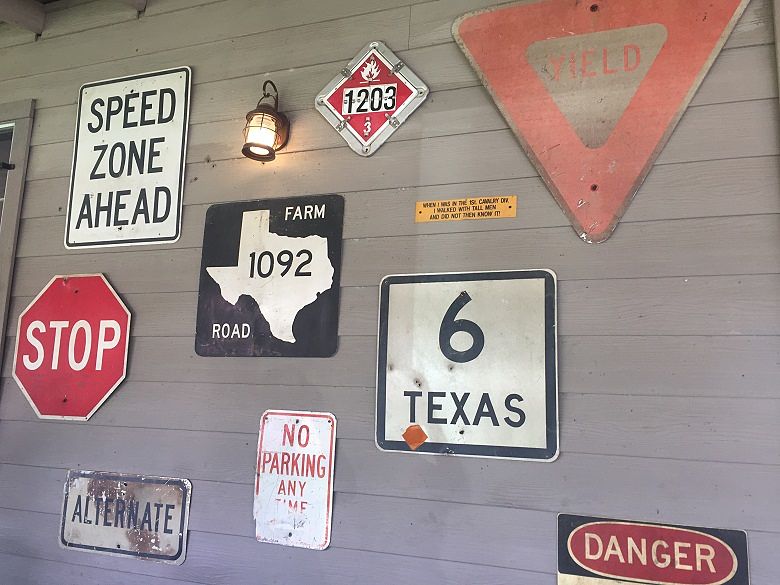 Sorry for the delayed post, the past week has been crazy!

Last Thursday we jetted over to Texas for one of my best friend’s wedding. We had such an amazing time in the south and I am so excited to tell you all about it!

Justin and I flew into Houston on Thursday afternoon and immediately goggled the best BBQ in Houston. I mean, what else where we going to eat? There were a few options that came up including Killen’s BBQ, which came up as the #1 spot in Houston and Corkscrew BBQ which came up as #2.

Killen’s was 45 minutes south of where we were so we settled on Corkscrew. 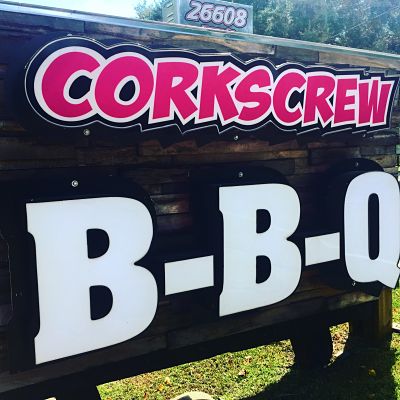 This place opens at 11 am and closes at 6 pm, but I don’t recommend going late. Once they are sold out of BBQ goodness they close down for the rest of the day. Corkscrew was originally a trailer, but has now graduated to a  brick and mortar thanks to owners Will and Nichole Buckman.

Justin and I noticed that most of the BBQ joints were busiest at noon. We were kind of weirded out by this because most of the places had major lines, like, do people in Texas get a 2 hour lunch break?!

We got to Corkscrew around 1:30 and were praying that the food had not ran out. Luckily for us there was plenty of BBQ to go around.

We decided on 1/2 a pound of brisket and 1/2 a pound of ribs, half wet, half dry, mac and cheese (duh), pickles, onions, jalapeños (another duh) and bread. All the meat was super tender, smokey and charred. 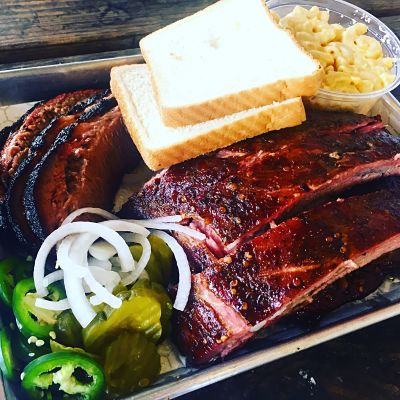 I don’t know about ya’ll but when I pictured the pound of meat in my head it really didn’t look like much. I was pretty sure that Justin and I would be able to murder that plate.

We were DEF wrong. We did our best to clean the plate but we ended up with leftovers. Not complaining at all, in fact the leftovers make a pretty good story that I will share in a little bit.

Corkscrew was a delicious start to our food tour of the south. The staff was super friendly and accommodating!

OH, BUT WAIT. NOT DONE YET.

Margaritas are a huge thing in Texas, especially in Beaumont. Beaumont, as my friend Cara would say, is pretty much Louisiana, only a 30 minute car ride away. On Thursday night once we checked into our hotel we met up with some of the wedding faves at La Cantina for margaritas and food.

I ordered a Cadillac Margarita and was kind of shocked when it came out. It was made with a mixture of orange and Midori, which I was not expecting.

CONFESSION: I haven’t had Midori since I was an underage college kid who couldn’t hold their liquor and the only drinks I knew were Midori Sours and Amaretto Sours.

Not going to lie. Was not a fan. All I wanted was some tequila and Grand Mariner…I tried to send it back but was given a death stare by the bride. So, like any self-respecting woman would do. I DRANK THE MARGARITA.

Overall the food was pretty good. Living in San Diego I am spoiled with the amount of good Mexican food. Can’t go a week without some type of  Mexican!

All of this was DAY 1. We of course hit up more spots over the next 3 days.

On Friday my best friend Rachel  landed at Hobby Airport and Justin and I picked her up. She was just as ravenous as we were the day before and wanted to get BBQ. Because, I mean, DUH (again).

This time, we did go to Killen’s . It was super close to the airport that Rachel arrived at, so we had to go check out what everyone was talking about.

First of all, when we arrived, at noon, the entire parking lot was full. Good sign. We went to the front of the restaurant and saw a line out the door and half-way around the building! Yeah, this place MUST be good. We joined the line and was greeted by a server with FREE ice cold beers.

SIDE NOTE: IT’S HUMID AND HOT AS FUCK IN HOUSTON.

Back to the free beer in line. Totally welcome and wanted. 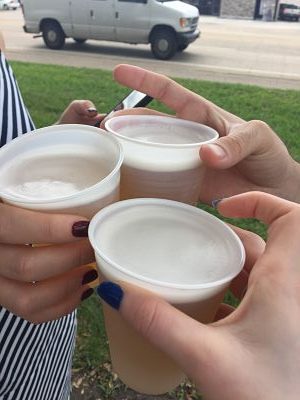 Once we made it inside, the cafeteria style order line allowed us to see the freshly cooked meat and we made our choices; ½ pound pork belly, ¼ pound pulled pork, ¼ brisket, mac and cheese, baked beans and creamed corn.

I am legit drooling and taking my mind back to that moment. Man I wish I was there right now. 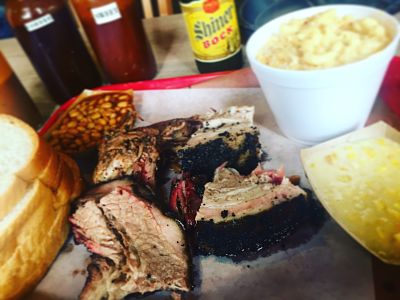 The food, hands down, was incredible. The pork belly was perfectly smoked and tender. The pulled pork had a light crunch to the outside and that creamed corn…OMG…best creamed corn I have ever had. They offered 3 different types of BBQ sauce, all mind blowing, and a nice selection of local beers. Killen’s was worth the wait and then some. I would def recommend checking this place out if you are in Houston.

We followed up Killen’s with a visit to Rice Village where we found a cute little bar to enjoy some mid-day wine and then followed it up with a shared cookie Sunday from The Chocolate Bar.

Looking back on how we started that Friday food fest, I can’t believe that we continued to eat.

Well, that’s a lie. I can believe it.

That night we decided to take a trip to Louisiana for some good Cajun food. Rachel and I have drove distances for food before but Justin isn’t as fat as us. Although, considering, he jumped on board pretty quick after we started googling places to eat. After some research we landed on Steamboat Bill’s  in Lake Charles, Louisiana. 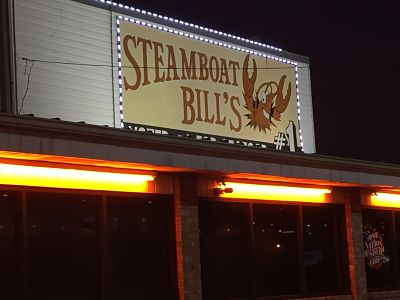 What they say about people being hospitable in the south is SO true. We were met by a host who offered jokes and places to grab a drink after dinner. It was pretty obvious that we weren’t from there and he knew it too. We started by ordering our dinner from the counter and then found a table to await the goodness.

We ordered a pound of spicy boiled shrimp with potatoes and corn, a regular portion of chicken and sausage gumbo, shrimp etouffeé (crawfish aren’t in season during the summer) and red beans and rice. 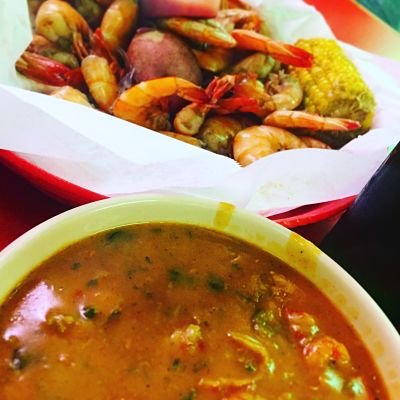 All the food was fucking incredible. There is no other way to put it. Just DAMN GOOD FOOD. The  shrimp etouffeé was the best I have ever had in my life. I know that is a bold statement, but hey, like I said, fucking incredible. Our server was super nice and gave us to-go waters when we left.

ANOTHER SIDE NOT: Nearly all places in the south give you to-go waters without even asking. CLUTCH.

We rolled out of Steamboat Bill’s and headed to a local bar, Dakotas that was recommended by the host. We gambled a little bit and enjoyed some Yuengling. Justin was especially happy since Yuengling is not a thing on the west coast (that’s BEER btw).

The bartender, who also knew we weren’t from Louisiana (shocking, I know) told us about the Daiquiri drive-thru bars and said we had to try them, as they are southern staples.

Yeah…you read that right…a drive-thru bar. Apparently it’s a thing…they put “tape” on top of the insertion for the straw. Not sure how legit that it is, but the daiquiri we had was pretty damn delicious and strong. The drink we had was called “The Killer” and had HI-C, everclear and vodka among others things (don’t worry we weren’t drinking and driving!).

After the initial culture shock of being at a drive-thru bar (which I didn’t get pictures of…FAIL), we made our way home and proceeded to point out every Waffle House and Cracker Barrel in site, while making a drinking game out of it. Rachel and I killed that drink pretty quick. Waffle Houses and Cracker Barrel are on EVERY CORNER.

Speaking of the Waffle House, it’s an inexpensive breakfast with lots of flavor!  Try the grits with a sunny-side up egg and smothered hash browns. The hash browns will be smothered in cheese and veggies of your choice. Fucking marvelous.

I would like to say our food journey ended there, but NOPE.

Saturday night was the wedding which was beautiful and straight out of a page from Pinterest.  Following the southern tradition the bride and groom served  delightful BBQ and yummy margaritas.

Remember how I mentioned earlier that we had BBQ leftovers which turned into a good story? OK, well…we are totally disgusting but ended up heating the leftover bbq in our hotel room that night. I used the coffee cups that the hotel provided to heat each rib, two at a time, in the microwave in the room.  Since there are no plates in the room  I took the brown bag that the leftovers were in and tossed the heated meat on to it.

ANOTHER ANOTHER SIDE NOTE: We ate of the ironing board because that was the closest “table” to the microwave.

I wish we had saved our Snapchat story of us eating leftover BBQ at 3 am on an ironing board because it was fucking hilarious.

The food tour does not end with our late night eating.

Sunday was our final day in Texas and it was bittersweet. Saying bye to everyone and of course the food. All of our flights were leaving late afternoon so we decided to stop at Casarez for one last meal. Casarez is advertised as a combination of Tex-Mex and Cajun.

4 margaritas each, 1 shot of tequila each, queso fundido with chorizo, nachos, quesadilla, toreados, ice cream and a shrimp enchilada covered in a etouffeé sauce later our food tour had ended. 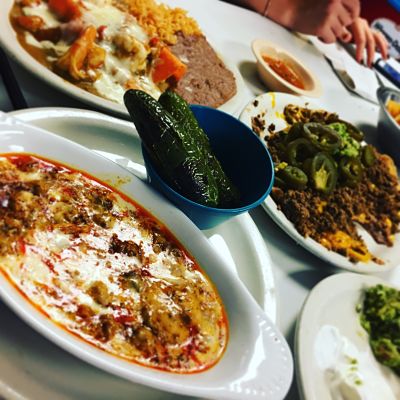 Casarez killed it with their food. Everything was so  tasty, especially the etouffeé enchiladas. I think I am going to have to steal that recipe.

If you are ever in Houston I would recommend checking out all off these places. If you know of any more awesome places to eat at or even just visit  leave me a comment. The next time I am in the south I would love to try your recommendations!

I have made myself severely hungry from this post so I am throwing up the deuces and headed to the kitchen.