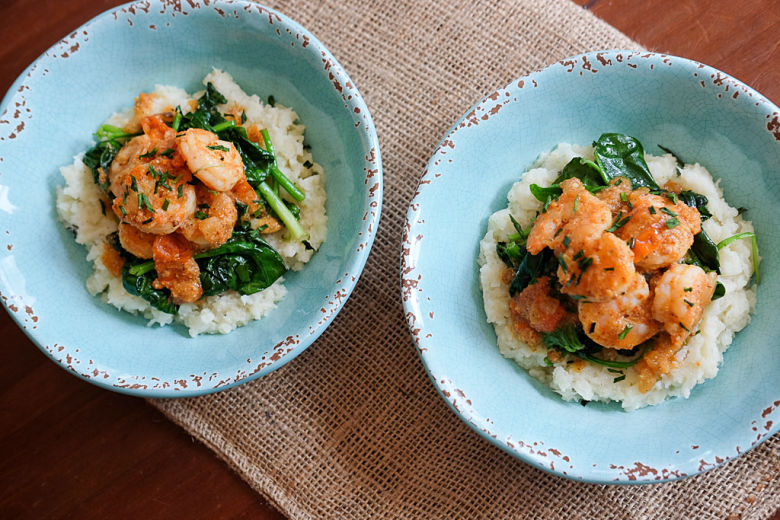 Currently sitting at my dining room table looking at the beautiful sunshine outside….

Don’t get it twisted though. It is cold AF outside. I’m talking FRIGID…. windy, like ice in your face.

I know drama is a running theme with me, but really…27 degrees and brrrrr.

My car has been in the shop the past week and won’t be done until this Friday, so running errands…aka, walking to the grocery story and the laundromat has not been fun.

Not even going to lie. Haven’t even made it to the gym because my ass does not want to walk in this weather.

Instead, I am sitting inside and eating my body weight. I mean, how else am I going to keep warm?

One of my favorite brunch items…well…anytime items, is Shrimp and Grits.

I love me some buttery, creamy grits, mixed in with some bacon fat, tomatoes and spicy shrimp.

I would eat grits every damn day if I could. It’s like a thing…the more butter and cream you add to something the better it tastes.

is butter a carb? 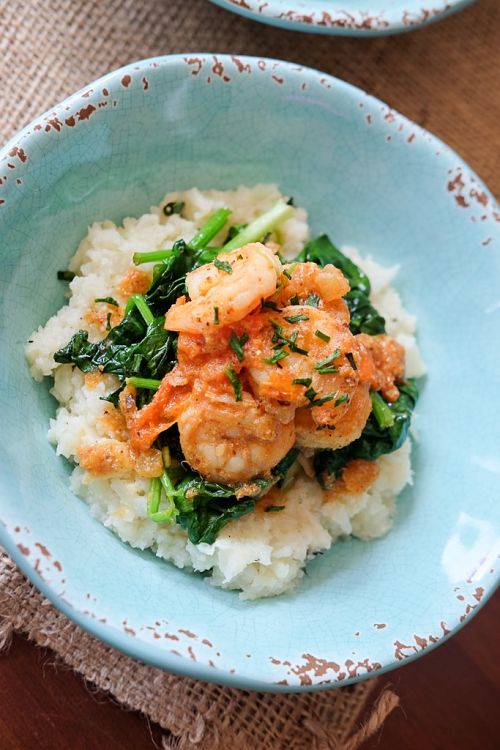 I thought bringing some of my Indian flare, with a healthyish twist to this classic dish would be perfect to satisfy my cravings.

I went with a cream cauliflower “grit,” and Goan style shrimp.

When people think of Indian food they often go straight to all the SPICE. People don’t realize that there is a lot of regional cooking in India and Goa is no exception.

Goa is small state on the west coast of India and it is basically paradise.

Think sandy beaches, drinking out of coconuts and a lot of Portuguese influence.

In the early 16th century many Portuguese settlers came to India bringing their religion and different styles of food.

Goan food is known best for the use of seafood, coconut (in all forms), vinegar’s (which is used a lot on Portuguese cuisine), and of course, chili peppers.

I paired the spicy, tangy shrimp over the cream grits and sautéed spinach. The perfect blend of east meets west, with a southern American inspo. Fun right! 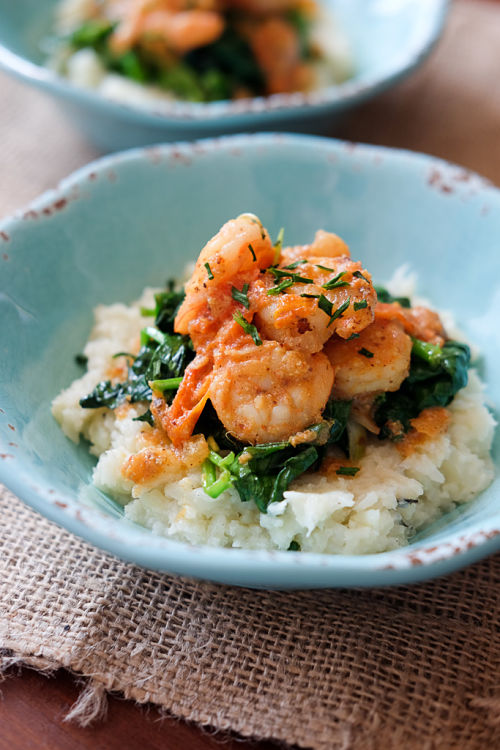 Print Recipe
Goan Shrimp and Creamy Cauliflower Grits
Creamy cauliflower grits with tangy and spicy shrimp and sautéed garlicky spinach.
Ingredients
For the masala
For the shrimp
For the Spinach
For the Cauliflower
Instructions
Recipe Notes

It’s a (hand)bag kind of life

Eating my body weight to stay warm is my mood all winter (spring, summer, and fall). I’ve never had shrimp with grits but this looks delicious. Will definitely give it a try!

hahah, I like you’re style. These are faux grits…..BUT YOU HAVE TO TRY REAL GRITS. SO, so, good!

As someone who is Portuguese, I can confirm that this is definitely an authentic Portuguese dish with your clever Indian flair. Although as a vegetarian I need to find me some veggie friendly shrimps so that I can make your cauliflower grits and Goan shrimp recipe!

That is so good to hear! I am going to Lisbon in August. Do you have any suggestions?

It’s a classic comfort dish and it’s definitely perfect for the cold weather. I’m sure you’ll find your motivation soon enough and start going back to the gym! Or you can try working out at home. Never the less, it’s good to reward yourself with a dish like this when that happens! Love the recipe!

Thanks Alison! And I should work out at home !

This looks amazing, I love the colour on this dish and I bet it tastes great too.

Thanks so much. It tastes AMAZING.

This dish is so yummy from your pictures! Too bad I haven’t had to eat cauliflower before. Anyway, I’d also love eating this, now that it contains most of the stuff I take. Loving the recipe!

You’ve never eaten a cauliflower!?!? you have to try! one of my fave veggies.

This sounds like an interesting combination. I like cauliflower but recently I stopped eating meat and fish.

Oh wow this looks so good. I’ve never thought of adding grits with cauliflowers but it sounds really fantastic. Definitely trying this recipe out for my meal planning this week.

These are faux grits, but i bet real grits mixed with the cauliflower would be delicious!

I’ve never had this dish before and I’m really curious about the taste since I love cauliflower. I think it’s something that I’ll try. Great recipe 🙂

This looks delicious! I am going to try this for sure! My husband will probably steal this recipe too for the fire station meal too!

I’ve never had shrimp and grits but I love the idea of this low carb Goan version. Somehow amongst the regional Indian cuisines, the Goan cuisine is not very well represented here in Dubai and I don’t think I’ve even eaten any Goan dishes.

I’m not a fan of traditional grits, but I LOVE cauliflower! I’d love to test this out. So yummy!! 🙂

Honestly you had me at shrimp. But this looks like such a unique and interesting dish as you use cauliflower to make a grits type of veggie underneath the shrimp. I bet it would be creamy and delicious. I will have to try this out.

I’ve never had shrimp with grits before. However this looks and sounds amazing! Being a low carber I’ll definitely be trying it with your cauliflower grit substitution !!

This looks delicious – which is most important – but it also looks healthy and light. Sort of the perfect meal, I guess. Have to try this out very soon.

Oh this looks so delicious. My mom would love to try that. I will definitely share this to her. Thanks for sharing.