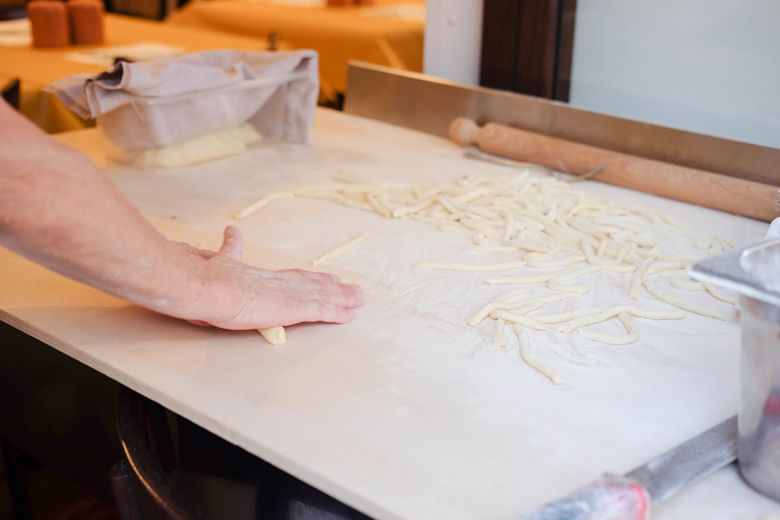 How ya doing? How was the weekend? Do anything fun?

If you follow me on Instagram, @sweetandmasala or on Snapchat, @komaliii, you probably saw that J and I got a puppy last week!

His name is Kush, he is 3 months old and American Foxhound mix.

The two of us are truly in love and spent the whole weekend trying to housetrain/potty train him.

A shit ton of work.

Monday’s are usually recipe days here on Sweet and Masala, but this Monday I am switching it up and giving you a breakdown of some of my favorite meals in Italy!

To start with; gelato.

Gelato is Italian ice cream that is super creamy and less rich in comparison to American ice cream.

“Compared to today’s American-style ice cream (that’s one made with egg yolks, as is basically the new standard in home recipes and commercial products), gelato has less fat in the base and less air churned into it during the freezing process. American ice creams are heavy on the cream, and have a fat content, by American labeling law, of at least 10% (considerably higher in most homemade and many premium versions). Gelato, by comparison, uses more milk than cream, so it doesn’t have nearly as much fat. Additionally, it usually—but not always—uses fewer (to the point of none) egg yolks, another source of fat in custard-based ice creams.” 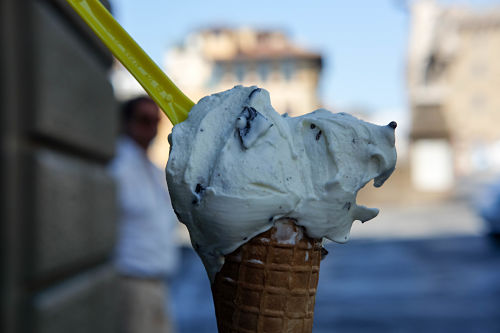 Our goal was to eat gelato EVERY DAY, but…that didn’t happen.

Looking back, I am not sure why it didn’t happen. I mean, you would think that I would always be in the mood to eat it…..

Definitely the biggest regret of the trip.

Note: next time I am in Italy, eat more gelato.

My favorite gelateria was Gelateria La Carraia, which is right off the Ponte alla Carraia bridge.

The prices were great at €2.50 a cone and the flavors were fab!

My go to flavor is Stracciatella which is essentially the Italian version of chocolate chip.

While we were in Florence, we were told by well, everyone to have Bistecca Fiorentina.

It is typically a Porterhouse Steak, served rare, and cooked over red hot coals, or wood fire and seasoned with local spices. 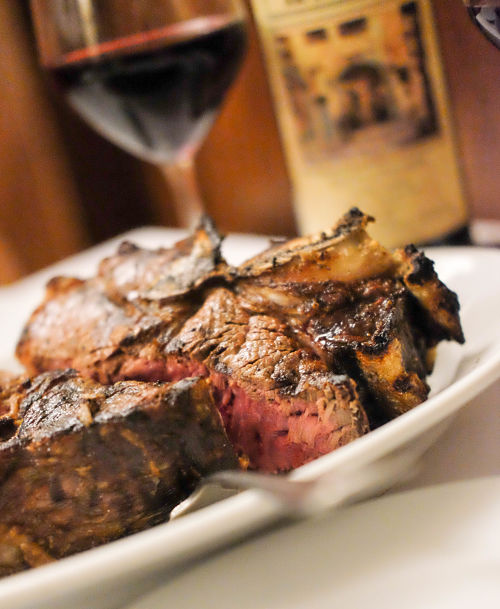 Truth time: the steak sounded SO good. We were super excited to try it.

The same restaurant was recommended by more than a few people (can’t remember the name for the life of me) so we decided to dine there.

After a shared pasta, stuffed zucchini blossoms and house red wine, the steak came out.

It had been seared perfectly, was glistening from the top and looked super juicy.

Unfortunately, what it gave in aesthetics it lacked in flavor.

I usually prefer my steak medium rare, but as it was served rare, which is something I could look past, to our disappointment there was a severe lack of seasonings. However, they did make it up with freshly made biscotti and a Caratello style sherry known as Vin Santo. 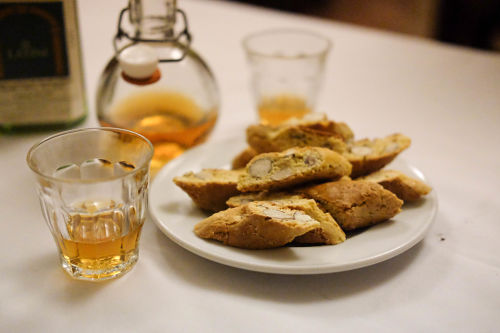 The dish that became Julia and I’s immediate favorite and spawned many repeat orders in Florence and Rome, was Linguine with Lobster.

It was offered on almost every menu and was served in a delicious red sauce (which I topped with crushed red pepper, duh) and lobster in the shell.

All I can say is that no restaurant could do wrong by this dish.

Had me licking my plate clean every time. 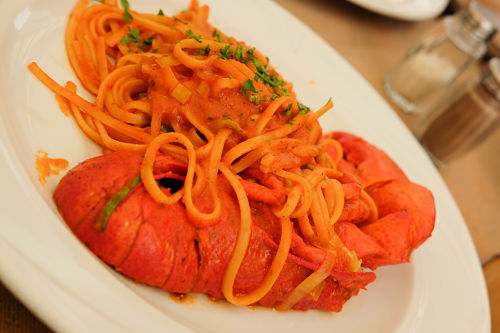 Speaking of pasta, I was dying, like d y i n g to have Cacio e Pepe (percorino cheese and pepper) in Rome.

What I love about this dish is its simplicity. It speaks for itself.

Fresh pasta with pecorino cheese and black pepper. It is hard to hide behind mistakes of this dish, but when its nailed…damn its perfect!

Get to Osteria del Sostegno for the best Cacio e Pepe of your life.

I need it now!

In addition to Cacio e Pepe, Rome is known for two other specialty pastas; carbonara and  buccatini all’amatriciana. 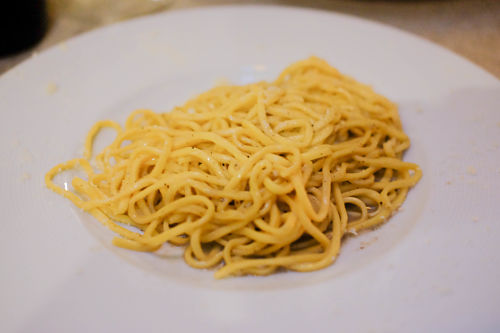 Spaghetti  alla Carbonara is the heaviest of the three most famous Roman sauces, made with eggs, cheese (usually Pecorino Romano or Parmigiano Reggiano), bacon (usually guanciale or pancetta), and is seasoned with black pepper and garlic.

Buccatini all’Amatriciana is made with tomatoes, guanciale, pecorino romano cheese and chili. Modern versions often include onions, garlic, and a touch of white wine

Basically, order any one of these three and you are GOLDEN.

Now you know I can’t talk about food in Italy without talking about pizza and fresh produce.

My favorite pizza was caper and anchovies at a restaurant we randomly found in Florence.

It was cheesy, salty, briny and melt in your moth delicious.

I still dream about that pizza.

As far as fresh produce goes, it is everywhere!

There are so many mercato’s that cultivate fresh produce every day. Never have I had a fresher tomato, or freshly sliced pieced of perfect prosciutto, and the BASIL.

Good lord. Hold me back. 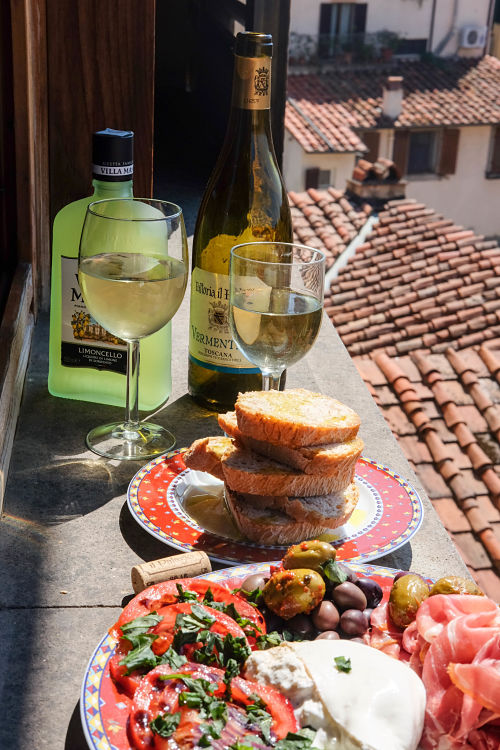 I could go on for days about the food and everything we ate.

Pretty sure I have a picture from every meal.

Check back in on Wednesday for all of my yummy vino details from the trip.

Must Haves for Pregnancy: Part 1

Italian food is literally my weakness. All these plates look amazing!

My mouth is literally watering! Everything looks and sounds so good. Well, except for that steak – what a shame. ???? At least everything else was good. Gelatto is my absolute favorite too! Have fun with your new pup!

Italian food is my favorite!! These dishes look amazing, I’m so jealous. And hungry now…

Yum! All of this food looks amazing!

OMG now I’m hungry! Everything looks so delicious! Thanks for sharing!

This post is what my food lovin dreams are made of! So much goodness!

Yumm, I can’t wait to visit Italy!! I’m sure I will finally gain a few pounds haha!!

Hahah, I sure did!